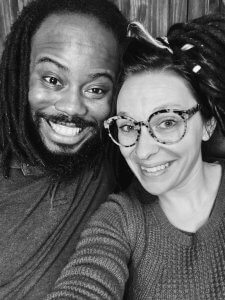 Alex Deputie
Alexander was born in Liberia, Africa. Due to a violent civil war in his home country, his
family traveled on foot to the neighboring country of the Ivory Coast where they lived in a
refugee camp. Two years later, Alexander came to America. He describes himself as having
been raised as “a part of the system” in education, welfare, worldview, and desires. It wasn’t
until he received Jesus as his savior and Lord in his early 20’s that things began to change. He
fell in love with the Word of God and with the history of America.

Alexander is now the husband of Cassie for 12 years, has eight children, and is
changing culture in every area. He not only home educates his children, but he has removed
them all off the welfare system, started his own business, and participates in local politics. He
is passionate about teaching his U.S. Constitution class and helping others filter these
troubling days through the lens of scripture and the documents our founding fathers crafted
that grants freedom to all, even young immigrants from Liberia.

Cassie Deputie
Cassie received Jesus at the age of 5 years old when her kindergarten teacher shared
the gospel with her. Living in a fear of the Lord kept her through all the trials and traumas life
afforded her and by God’s grace, she is now a wife married to Alexander for 12 years, and a
mother of 8 children (and her first kiss was on her wedding day).

Cassie’s love for being industrious has led her family on many adventures. Taking her
children along with her she loves to cook traditional foods, led worship at her church for the
last 10 years, has written over 50 worship songs, started an herbal medicine company with her
siblings, and dabbles in nearly every craft and trade there is. She has a YouTube channel where
she loves to share what she’s cooking, what topics her and her children are exploring
academically, and how she applies the Word of God to every area of her life.