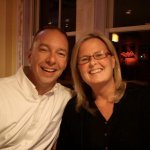 DR. STEVE SCHEIBNER earned a B.S. in Economics and, upon graduation from college, he joined the U.S. Navy and was commissioned and trained as a pilot. He married his college sweetheart, Megan, in July of 1984 and they began a life together that, to date, has included eight children and 15 moves. Steve was deployed three times in four years flying the P3 Orion. Steve left active duty in 1991, was hired by American Airlines the same year, and went on to earn a Master of Arts in Theological Studies, a Master of Arts in Christian Ministries, and his Doctor of Ministry degree. His dissertation topic was the role of parents in the character development of children. Steve is also the author of several books and studies. MEGAN SCHEIBNER earned a B.A. in Speech Communications which she uses as she teaches and speaks at conferences and women’s ministry functions, as well as when she counsels.  Megan is the author of a series of discipleship books for mothers and several devotional Bible studies.  She authored In My Seat, the story of Steve’s 9/11 experience, that has captivated millions on YouTube. Her newest book, An A-Z Guide For Character-Healthy Homeschooling, provides encouragement and practical tips gained through her 20 plus years of homeschooling experience. Steve and Megan are popular speakers, as well as frequent guests on Family Talk with Dr. James Dobsonand on the Glenn Beck TVshow.  They are instrumental in the lives of young parents, and have written and developed a parenting course entitled Parenting Matters: The Nine Practices of The Proactive Parent. In 2012, Steve retired as a Commander from the U.S. Navy and is currently a First Officer for American Airlines. He recently became the President of Characterhealth Corporation, a non-profit conference ministry aimed at equipping parents to train the next generation of character-healthy leaders.