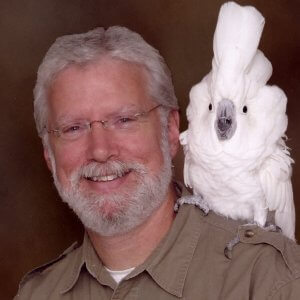 MIKE SNAVELY was reared in South Africa, the son of missionary parents.  His father was a bush pilot for a mission hospital among the Zulu people. Growing up in an area that teemed with remarkable and diverse creatures, he had a wide variety of fascinating experiences which helped to mold his future.

After graduating from Oak Hills Christian College in Minnesota in 1979, he returned to South Africa to work for the National Parks Service in the Kruger National Park, which in some circles has earned him the nickname, “Ranger Mike”. Following this, he began a career as an African wildlife artist. In 1986 Mike and his new wife Carrie went to South Africa as missionaries with The Evangelical Alliance Mission (TEAM) and served by teaching at Durban Bible College.

Upon returning to the United States ten years later, they founded a not-for-profit organization named Mission: Imperative!,  a ministry of teaching creation-oriented issues through a series of seminars covering a wide range of topics. The “Creation Safari” seminars Mike has developed are not dry lectures, nor does he speak over people’s heads.  His “nuts-and-bolts” approach is to make these sessions as interesting and understandable as possible.

Mike is the author of Creation or Evolution: A Home-Study Curriculum and has produced many DVDs that cover various topics relative to creation issues. In 2010, they started a series of traveling “safaris” that put wings to their subject matter. There are currently two — one to the Southwest and one to South Africa.  www.missionimperative.org